Nursing Norwegian mothers produce over 10 million liters of milk a year, an increase of nearly 20 percent since the mid-90s, according to the first national study of infant nutrition in Norway. 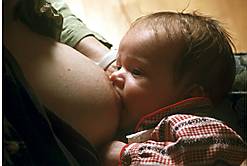 The Directorate of Social and Health Affairs project "Spedkost" (Infant Fare), revealed that 70 percent of Norwegian babies receive mother's milk as their only food for the first three months of their life.

By the age of six months 80 percent of all Norwegian infants are still nursing. Only one percent of Norwegian babies has never had breast milk, the study found.

"The study shows a gratifying increase in breastfeeding in Norway. We have a clearly higher occurrence of breastfeeding than that reported in many other countries in the world," said directorate sectional director Gunn-Elin Bjørneboe.

Bjørneboe credits health service advice with the rising trend. Full breastfeeding was recommended for the baby's first four-six months of life, but now health officials suggest reliance on breast milk for the first six months if mother and child are happy with it.

The study also showed that commercial porridges were introduced into extremely many diets at the six-month mark. About 80 percent receive vitamin-D supplements as advised and a bit over half received cod liver oil.