The now-grown-up residents of Norwegian orphanages, who have charged they were physically and sexually abused for years, are now also urging a full investigation of state-run boarding schools where they were placed later. The abuse continued there, they claim.

State and county officials have been trying for months to come to grips with the sudden torrent of charges that started being reported in earnest last year. Several investigations are underway into conditions at orphanages in the 1950s and 1960s.

Scores of former residents have gone public after Truls Braathen, now age 53, came forward with his story. "I can remember that I endured so many beatings," he said at a conference for victims of orphanage abuse this week. "I was thrown in a cellar, in dark rooms, and was forced to eat food that had been dipped in soapy water."

He told newspaper Dagsavisen that children in the city-run orphanage in Oslo where he grew up were also often forced to eat their own vomit and had their fingers squashed in doorframes. 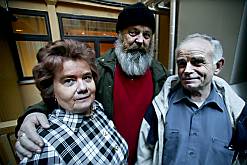 Newspaper Aftenposten reported that calls are also being made for investigations into the boarding schools where childrens' home residents were later placed. "These were isolated institutions where children lived and got instruction," says Ola Oedegaard, secretary general of the agency trying to further residents rights (Stiftelsen Rettferd for Taperne). "Here, the abuse was often worse."

He said his group has now registered more than 700 complaints from former residents of childrens' homes. Norway ran 59 boarding schools at one point, most of them in Oslo and Akershus.

Oedegaard, who also was tormented at children's homes, said those run by Christian organizations were "the worst." He has said that much of the abuse was carried out "in God's name."