The coach of soccer club Aalesund conceded Friday that sex was among topics discussed in a meeting he had with the agent mother of soccer players John Arne and Bjoern Helge Riise. But he denies her charge, made on national TV Thursday night, that he sexually harassed her. 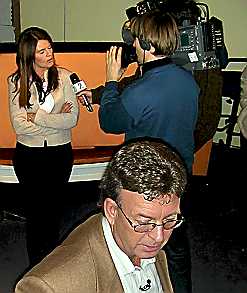 "This has been completely taken out of context," coach Ivar Morten Normark told newspaper VG Friday. He claims he was only joking when he tried to tell Berit Riise what Norway's soccer community thought of her.
"I told her how my acquaintances view her, and that it wasn't always positive," Normark said.

He claimed there are always two questions soccer players and officials get when they say they're from Aalesund: "Do you know Berit Riise, and how many times have you had sex with her?"

Riise claims Normark sexually harassed her during the conversation, which took place during the summer of 2001, and that she's had problems ever since.

Riise is perhaps Norway's ultimate "soccer mom." She's worked as agent for her sons John Arne, who now plays professionally for Liverpool, and Bjoern Helge, who has been having a troublesome transfer to soccer club Cardiff.

Her charges came out of the blue during a televised debate on Bjoern Arne's move, shocking both those on the TV2 show and viewers as well.

Bjoern Arne has played for Aalesund's B team, which Riise claims has caused trouble by demanding money when Bjoern Arne tried to transfer first to Manchester City and then to Cardiff.

A debate on the topic with Aalesund chairman Arne Aambakk took an abrupt turn when Riise started yelling at him during the broadcast and demanded he "tell the truth." She then leveled her sexual harassment charges.