Two Norwegians, part of a group of intoxicated Scandinavian tourists on holiday in Egypt, were nearly lynched at there sort town of Hurghada this week, after their antics deeply offended the local population. 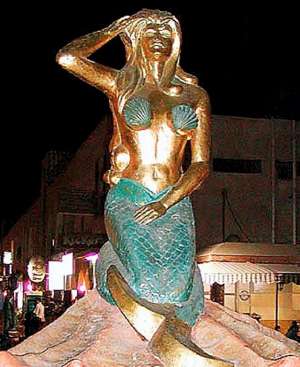 This was the mermaid statue in Hurghada that figured into the Scandinavian tourists' offensive behaviour. 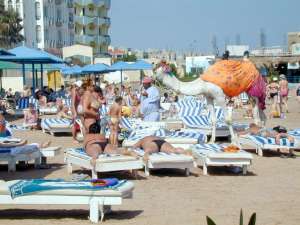 Residents of Hurghada generally tolerate tourists, but the group of Scandinavians went too far.

The two Norwegians and three Swedes ended up being arrested by local police, who protected them from an angry mob.

The troubled started after the five Scandinavian tourists got drunk, dressed themselves up like Muslim pilgrims and started dancing around the statue of a mermaid located in a town square, and pretending she symbolized Allah.

The Scandinavians apparently were trying to parody Muslim pilgrimages to Mecca. When they started stripping off their clothes, the local Egyptians had had enough and went on the attack.

A local policeman told Swedish newspaper Aftonbladet that his colleagues had to step in to protect the tourists from angry local residents. "If they hadn't been arrested, they probably would have been lynched," an Islamic expert told Aftonbladet.

The tourists were initially held on charges of indecent conduct, since some of the men exposed themselves. The charges were later raised to blasphemy, which can be punished severely.

Norway's foreign ministry was pulled into the case, but an official at the Norwegian Embassy in Cairo said he hoped to be able to get the Norwegians released and sent home.

He said the embassy had been in contact with Egyptian authorities. An official at the Norwegians' tour company, Apollo, could confirm on Friday that the men, all aged 35-40, had been released and were free to leave Egypt.

Hurghada is a popular tourist destination for Scandinavians, and the local population generally tolerates the partying and scanty clothing so foreign to their own culture.

Aftenposten English Web Desk
This email address is being protected from spambots. You need JavaScript enabled to view it.