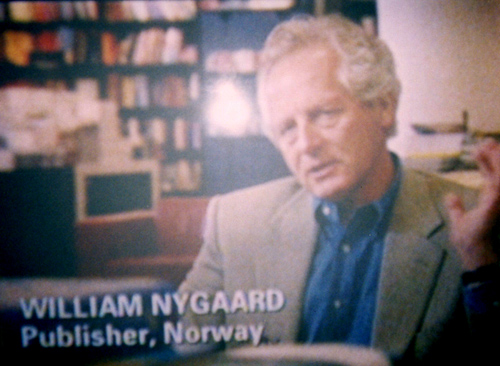 William Nygaard, Norwegian publisher and translator of Salman Rushdie's book, 'The Satanic Verses' pictured above on British television in October 2000. 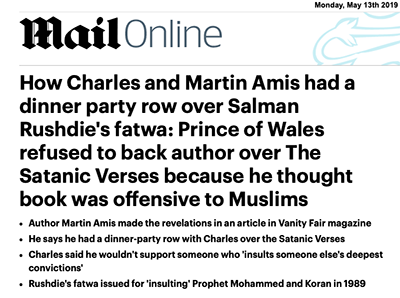 Prince refused to back Rushdie over fatwa death threats 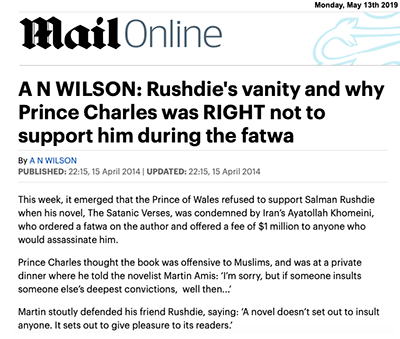 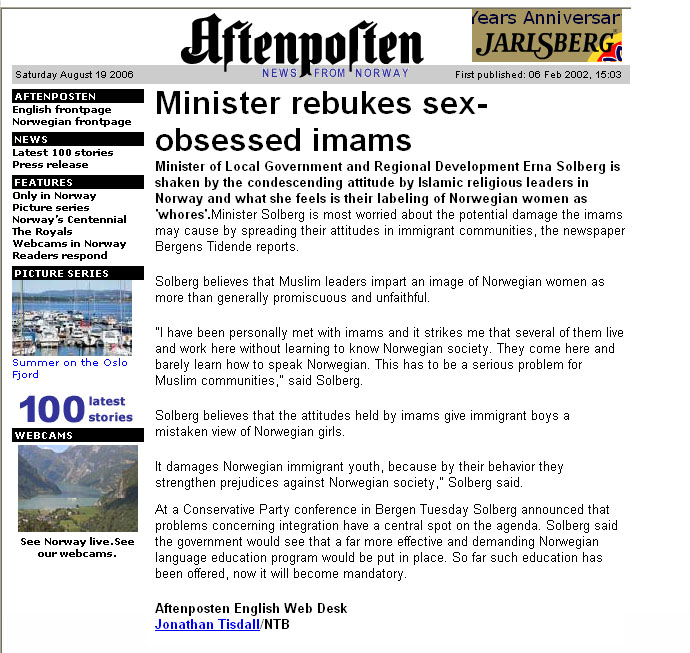 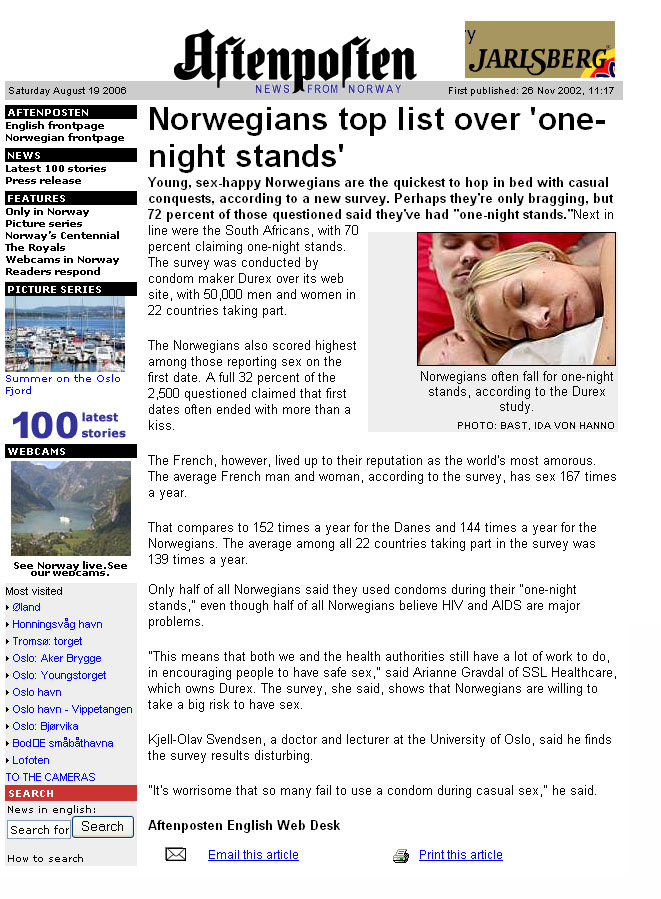 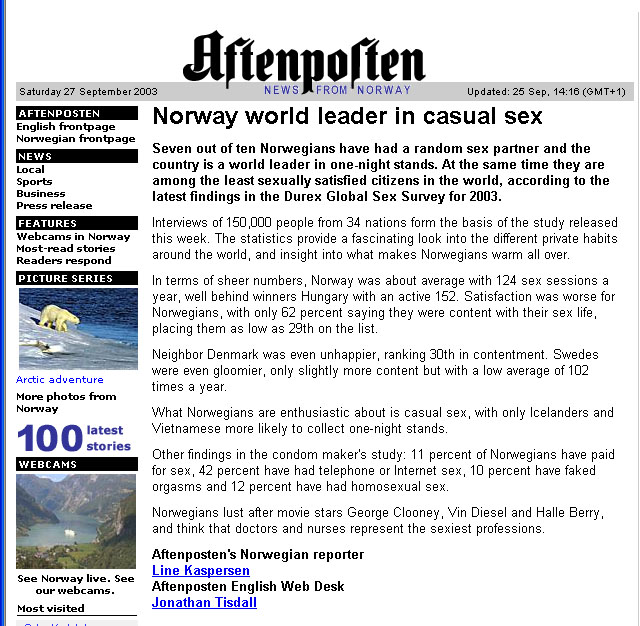 A Norwegian neo-Nazi who unleashed a stream of Nazi rhetoric during a demonstration two years ago did not violate a key law meant to fight racism. Norway's Supreme Court ruled Tuesday that the neo-Nazi's claims are protected by other laws guaranteeing freedom of expression.

Terje Sjoelie, former leader of the white supremacist group called "Boot Boys," had been convicted of violating Norway's so-called "anti-racism paragraph" when he launched an anti-Jewish and anti-immigrant tirade.

The right-wing extremist had claimed during a public demonstration that, roughly translated, "every day, our people are being plundered and destroyed by Jews who suck our land empty of wealth and replace it with immoral and un-Norwegian thoughts."

He also claimed that "immigrants rob, rape and kill Norwegians every day."

A lower court ruled that his claims violated Norway's anti-racism law. It calls for fines or a jail term of up to two years for those who make claims that spread hate or make threats against others on the basis of religion, race, skin color or national or ethnic background.

The Supreme Court disagreed. A majority of 11 high court judges determined that Sjoelie's remarks weren't punishable. They noted that the remarks didn't contain any concrete threats.

The head of Norway's Anti-Racism Center, Nadeem Butt, was shocked by the decision. She equated it to an attack on the rights of minorities in Norway.

"The majority didn't even consider how offensive the claim was for Norwegian Jews," she said, regretting that since neo-Nazi groups are legal, the court rules their propaganda is, too.

She claimed the court decision "has moved the barriers" for how offensive people can be against ethnic groups in Norway.

Employees at an Oslo building firm were so shocked and outraged by the Al-Qaida threats against Norway that they have refused to carry out assignments for Muslims. One customer, born and raised in Norway, has had his plans to build a garage derailed, newspaper VG reports.

You are probably a Muslim and after the recent Muslim terror threats none of my employees want to work for Muslims," read the letter sent by company head Olav Oeye.

The letter arrived the day after the terror threats, and while the 27-year-old Muslim was waiting for Oeye's firm to deliver a price after surveying the plot for the garage.

"I had an offer from Grimstad Garages. In the offer they gave the names of three contractors who I could call to build the foundation. Olav Oeye Inc. said they could come Saturday at 11 am," the man told VG.

"I could hardly believe what I was reading. I am just as Norwegian as others, even if I have brown skin and have another religion. I have never had my feelings hurt so badly before," the ex-customer said. He will now charge Olav Oeye Inc. with religious discrimination and promises legal action.

"The garage will get built anyway but now it has become an important matter of principle for me to pursue this. My Norwegian friends are the most shocked," the Norwegian-Pakistani said.

Olav Oeye remains unrepentant, and is not swayed by the argument that the 27-year-old is born and raised in Norway.

"After reading the papers and listening to the radio it wasn't amusing thinking about working for Muslims. WE have it a few times before and there are always problems with the bill. No, why should I (regret) it? I am retired and have five or six employed who do what I want," Oeye said.

Lawyer Abid Q. Raja said he had never heard such a clear case of religious harassment and, according to VG, nearly began to laugh when he heard the contents of the letter.

"This must be the most unprofessional firm in Norway. But it also indicates that there are very many who have similar opinions in Norway but are not brave enough to say so," Raja said, and said the letter clearly violates the law.

The National Association of the Building Industry also expressed shock and said they would consider reactions if Oeye Inc. was a member, but did not believe they had the jurisdiction to exclude the company.

"This is so odd that our ethical rules don't cover it. It is irrelevant if a prospective client is a Muslim or not, regardless of threats to Norway. This is completely unreasonable. It is just not on," said Association director Odd Trender to VG.

Oslo's bishop, Gunnar Staalsett has warned Minister of Local Government and Regional Development Erna Solberg of the dangers of criticizing Islam after she told Norway's Muslims that they should modernize their religion. Staalsett fears that the statement will create a warped view of Islam. 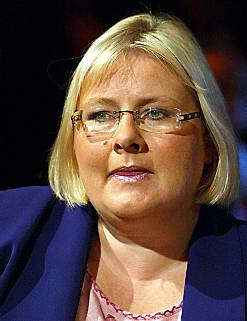 "There is naturally a need for reform in all religious communities, but an initiative from the government sounds a special note," Staalsett told Norwegian Broadcasting (NRK).

Staalsett is concerned that the minister's remarks can cause provide a mistaken image of Islam as a whole.

"One should be very careful about portraying a religion from its worst sides," Staalsett said.

Residents of Bykle, population 864, are reportedly deeply troubled that their new church, currently under construction, faces Islam's holy city of Mecca. Fear of the anti-Christ runs through the town, newspaper Faedrelandsvennen reports.

The old church in Bykle lay east-west with its entrance from the west. The new church points southeast. Hallvard Gjerden, 64, of the Norwegian Lutheran Mission (NLM) was one of the first to make a connection.

"The church is facing directly towards Mecca - to the millimeter. I've checked," Gjerden told the newspaper.

"People fear that the Muslims will seize the church and use it as a mosque. You don't dare write this, but the mosques are the church's greatest enemy. The Muslims want to conquer the earth and kill Christians," Gjerden said.

The head of the building commission for Bykle church, Tor Mosdoel, was only amused by Gjerden's theories.

"This is just something people have made up," said Mosdoel, who has no fear of Muslims whatsoever. "The church had to have a northern entrance because the building site gave us no choice," he said. 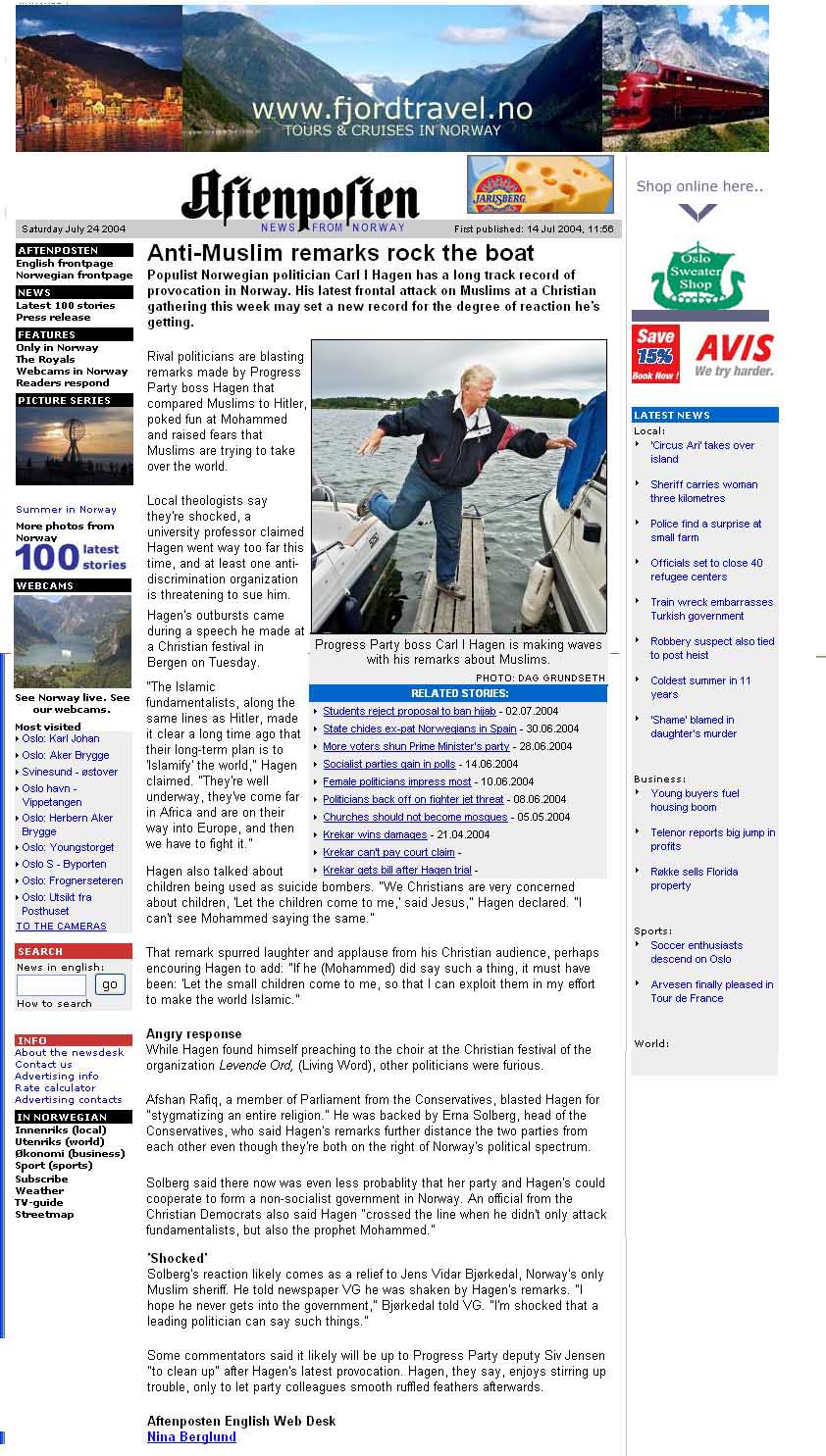 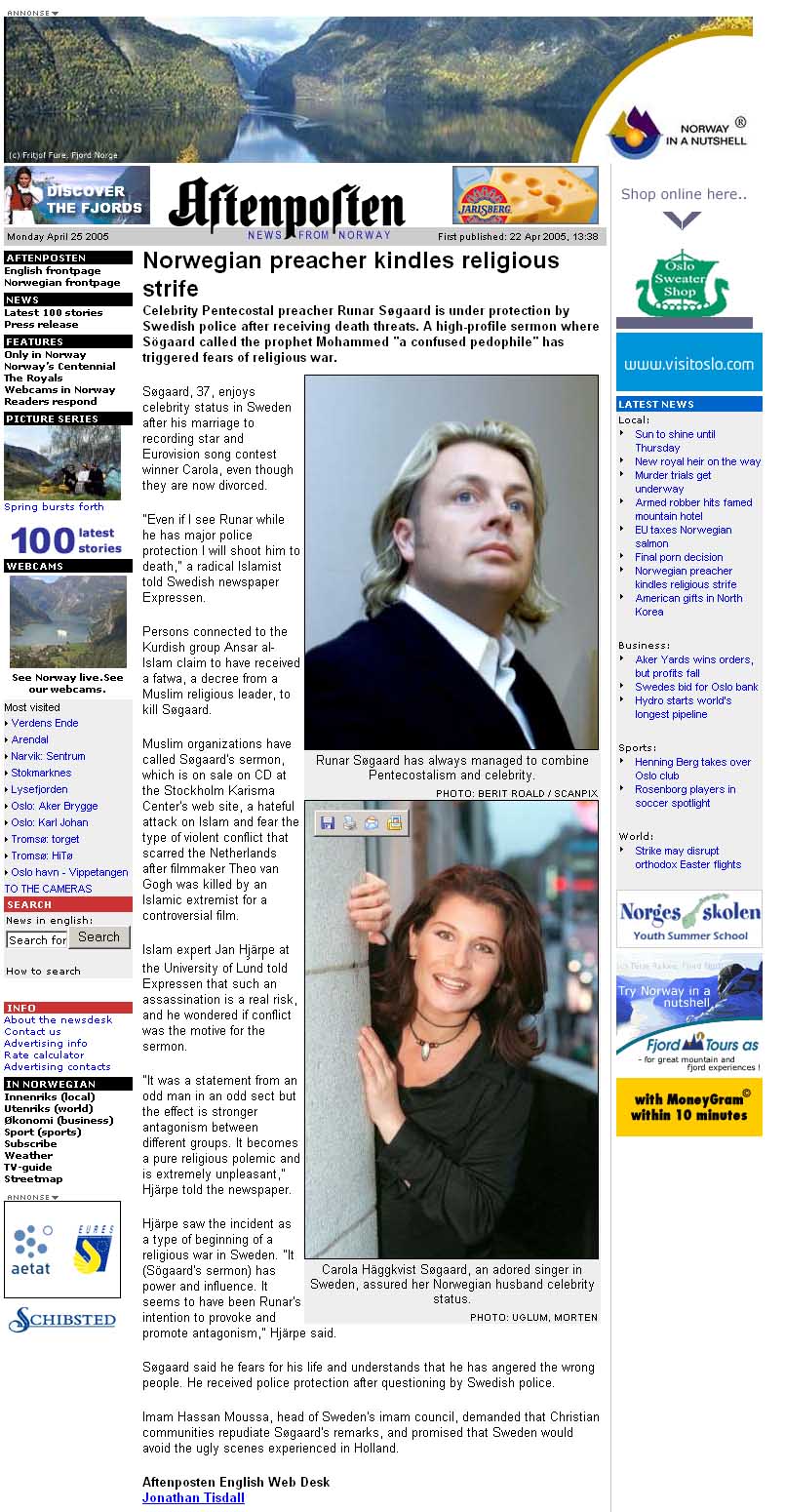 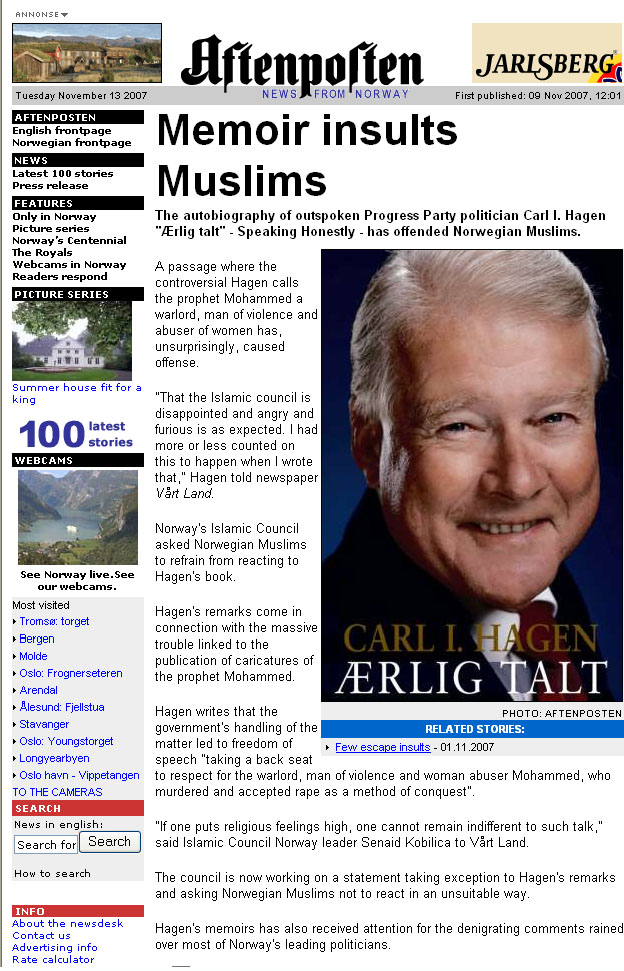 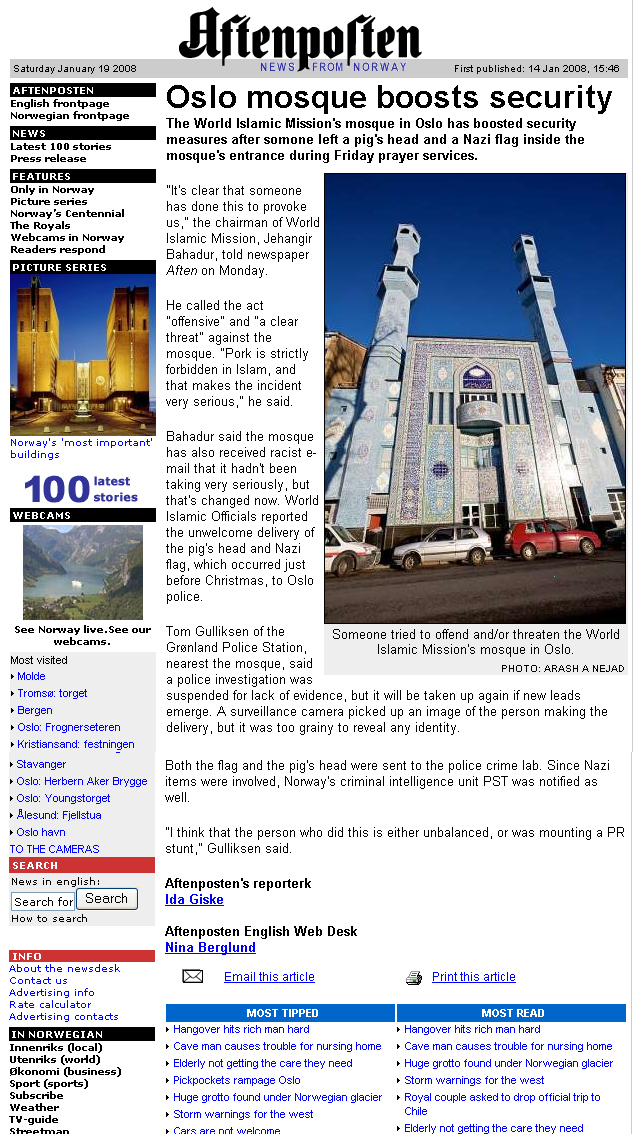 Muslims march over cartoons of the Prophet

Something Rotten in the State of Denmark

A free society must respect all its religions

From the New York President of the World Jewish Congress
The Times, Wednesday February 1st 2006

This article from 1995 is in Norwegian but reference is made 19 times to the 'Muslim man', associating him with sexual perversion and mental illness. The woman interviewed is in fact a mental patient herself having been treated at the BSS Psychiatric Clinic near Drammen.

Emails received in response from Norway

Bardot fined yet again for inciting racial hatred of Muslims