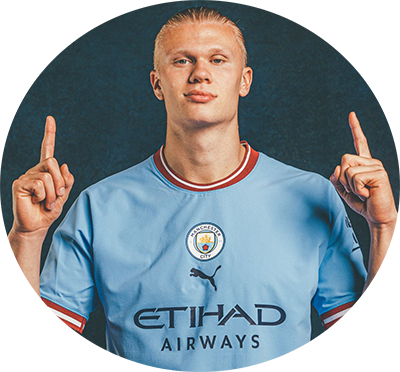 Norway's Erling Haaland signs for the Muslims ... Manchester City. How the many Muslim-haters in Norway must be seething! Ha! Haaland will very much enjoy this Norway Shockers website, exposing the rampant Islamophobia in Norwegian society which eventually led to the Anders Behring Breivik own goal.

Telephone conversation with Ingunn Røren in June 1996:-
IR. Hello.
F. Yes, hi, good morning, is that Ingunn?
IR. Yes.
F. Yes, hi. It's Frederick here from England.
IR. Mmm.
F. I understand that you've tried to call the police last week.
TS. Yes, I did.
F. Oh, when?
IR. Not last week, the week before.
F. Er OK, well er the lady, the policewoman, Torill Sorte, I spoke to her yesterday and she told me that she hadn't in fact spoken to you. You phoned last week.
IR. Maybe it was last week, I don't know.
F. Yeah, that's right, she says she hasn't spoken to you yet but I spoke to her yesterday and they have found no evidence at all about any death threats to her son. Heidi specifically said that I made these threats in letters which …
IR. According to the policewoman, the investigation's not over yet so …
F. Well it is over in the sense that she will write to Heidi to say that there's no death threats to her son in letters - that's a big lie, there's … …
IR. That's not what she told me.
F. Huh?
IR. That's not what the policewoman told me.
F. Well I spoke to her yesterday.
IR. Yeah, but I have spoken to her several times and that's not what she's telling me.
F. What's she told you?
IR. She's told me a few things I can't tell you but the investigation is still going on so she can't speak about everything. You're still under investigation.
F. Well she told me specifically yesterday that she will write to Heidi saying that there is nothing … I mean I spoke to her yesterday and she said …
IR. Yeah, OK, when I see that letter I'll believe that.
F. Yeah, well why don't you give her a ring? Give her a ring now. You know her name's Torill Sorte and she specifically said to me … …
IR. Yeah, OK, I can do that.
F. OK but Heidi told [you] that I have made death threats to her son.
IR. Yes.
F. She told the police that. And the police asked her "Where's the evidence?" And Heidi said "In letters he wrote which the Bergen police have"
IR. OK I'll ask her.
F. OK. But the Bergen police have spoken to Torill Sorte and she has said that there is absolutely nothing whatsoever in any letters indicating death threats to her son or her neighbours. And there's no obscene letters, nothing, so you know you are gonna have to print some apology eventually.
IR. If it's true what you told me now I'll speak to the police and then decide what to do.
F. OK, speak to the police and I will give you a call back - when can I give you a call back?
IR. Today I'm leaving. I'm going to work with another … a murder case.
F. You're leaving the newspaper?
IR. Not leaving for good, I'm travelling.
F. Well can I call you back in say an hour?
IR. No, I'm leaving the building, so I won't be here today.
F. So when's best to call you?
IR. Maybe on Friday.
F. Friday?
IR. Yes.
F. OK. What she did say is that if Heidi comes up with some new evidence, then they may do something, but she says she doubts very much - well Heidi would have come up with new evidence by now but the point I'm trying to make - I know you don't like me, but the point is you've been conned; you've been lied to by that girl and I'm very surprised that - you knew she was in a psychiatric unit [as I assumed she saw the report in Norwegian specifying the B.S.S. Clinic]
IR. No I didn't.
F. Oh, you didn't know that before [i.e. before Heidi was interviewed by the newspaper].
IR. I don't think she is.
F. Well why don't you ring her doctor, Dr. Broch? His name is Dr. Broch at the B.S.S. …
IR. Why do you still care about all this?
F. Because I want to clear my name, that's why.
IR. I haven't written your name.
F. No, no. I want to clear my name in the sense … I know you haven't written my name, but you've accused me of things that I haven't done and … why don't you ask Heidi about the allegations she's made to them [and I was going to add about a Bergen shopkeeper attempting to rape her but Ingunn Røren interrupted].
IR. I don't care about Heidi; what you say about her. I don't care.
F. But, I mean don't you believe me?
IR. No I don't.
F. Oh you don't believe my story?
IR. No I don't.
F. What specifically don't you believe?
IR. I've tried to tell you this before and my editor has tried to tell you this and I will give the police a call; that's all I'm going to do.
F. But can you … you must try and appreciate that I must try and understand why you don't believe me, because you can simply ring up her doctor, Broch. His name's Dr. Broch. Ring him up at the B.S.S Psychiatric Clinic. She stayed there in 1988.
IR. What's the point about that? 1988.
F. Yeah, because you don't believe she's been in a Unit. She's a sick woman.
IR. Even if she's been in there, she's out again.
F. Yeah, but she's still sick.
IR. That's not our business.
F. No, but you have …
IR. I don't have the time any more. I'll give the police a call about all this talk.
F. Oh, all right then, I'll call you Friday, bye bye.
IR. Bye bye.

On the 14th July 1998 I was sitting at home in the morning wondering why I still hadn't received my first letter yet from my lawyer Karsten Gjone. So I decided to call him. He said he still hadn't managed to send me a letter but he had in front of him at that very moment a copy of that morning's local newspaper, Drammens Tidende, in which he said I was featured on the front page and again inside. So I asked what it said and instead of telling me even the gist of it, he said he'd put a copy of the article in the post to me. I asked him why he hadn't yet written to me and he said he'd now have to wait until I read the article. Great! It meant getting the whole damn thing translated.
Furious, I phoned Ingunn Røren the Drammens Tidende journalist who wrote the story (14.7.1998)