Norwegian politicians and business leaders were among those still trying to come to grips Monday with the apparent suicide of former cabinet minister Tore Toenne over the weekend. One blamed the media, while others were re-examining their own roles in the controversy that swirled around Toenne this autumn. 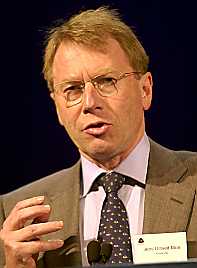 Industrial magnate Kjell Inge Roekke, who had made payments to Toenne that later landed him in trouble, broke his silence late Sunday by releasing a brief statement. Roekke and his industrial concern Aker Kvaerner, of which Toenne was a director, called Toenne's death "an incomprehensible tragedy" that left them "in deep sorrow." They offered sympathy and condolences to Toenne's widow, his two grown sons and his friends.
Toenne's lawyer at the Oslo law firm BA-HR, which also has Roekke as a client, said he couldn't understand why Norway's white-collar crime unit (Okokrim) had opted to indict Toenne on fraud charges.

Lawyer Olav Braaten, who has played a key role in the controversy around Toenne, claimed Toenne's acceptance of payments from Roekke after also having accepted state compensation during the same time period "may have broken some rules, but was unintentional." The payments were made through BA-HR and led to a conflict within the firm after their appropriateness was questioned.

The head of Norway's main employers' group (NHO), who was a friend of Toenne, claimed newspaper Dagbladet's coverage of the controversy drove Toenne to take his own life. Jens Ulltveit-Moe told newspaper Dagens Naeringsliv that Dagbladet's stories over the past few weeks amounted to "overkill," a position shared by NHO's former arch-rival, Yngve Haagensen, who recently retired as head of Norway's trade union federation (LO).

Haagensen noted that the media in Norway withholds the identity of people charged with murder, rape and most other crimes, while Toenne found himself splashed over the front pages.

Others, however, noted that Toenne clearly found his personal problems insurmountable. He was also a man surrounded with a vast network of resourceful, powerful and affluent friends, but that didn't seem to help.

"I've asked myself whether I could have done more (to help him)," said Labour Party leader Jens Stoltenberg, who, as prime minister, named Toenne to his cabinet.

That's something many others clearly were asking themselves as the country's holiday week got underway.