The notorious Norwegian tradition of celebrating the end of compulsory education with weeks of unrestrained dissipation before final exams is around the corner - and this year's crop vow ever wilder behavior, newspaper Dagsavisen reports. 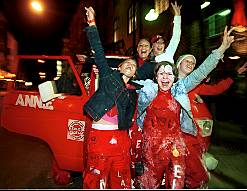 Russ from Bergen making it clear that they
defend their right to party.

The "russ" - final year students who traditionally wear red or blue overalls depending on their line of study - compete with each other in extreme drunken debauchery, with certain tasks earning them the right to add knots to dangle from their caps.

Some of the new tasks up for this year's knot-earning ritual are having sex with at least 17 partners, picking up a tender teen, getting a vagrant drunk and vomiting on the person next to you.

In Oslo's Manglerud district, the russ are ready.

"We are going to get as many knots as possible," Stine Hazeland told Dagsavisen.

"It's a sign of how crazy you have been. But I don't think I'll be able to earn more than 20 knots," Helene Fryys said.

According to a recent nationwide survey, half of this year's crop of russ rate earning cap knots an important part of the celebratory ritual. In Manglerud, they are determined but not fanatical.

"Sleeping with 17 people during the russ celebrations is a bit low - but I bet someone will do it," Fryys said.

Many of the male segment are convinced they will run naked through downtown Oslo, where schoolchildren of all ages parade every year to mark Norway's national day on May 17th.

Social anthropologist Allan Sande wrote his doctoral thesis on the russ phenomenon, and calls the tradition a transition ritual marking the passage to adulthood.

"It illustrates the passage from childhood to adulthood and one breaks rules to become an adult. They come to grips with taboos like sex and intoxication," Sande said. He isn't shocked by the latest wrinkles in the knot stakes.

"It is a form of ritualized play, very organized and regulated. The recognition of the one with most knots, the elite russ, reflects our career society - the knots can be compared to a résumé," Sande said.

While seven out of ten russ agree that the three-week party is a non-stop booze-fest, the traditional emphasis on earning recognition for swift and heavy drinking is gradually being replaced by an emphasis on sex.

Ethnologist Anne-Sofie Hjemdahl also sees this as a mirror of today's society.

"It is connected to the greater sexualization of society. Running naked down Karl Johan (Oslo's central, royal boulevard) would have been much more provocative 30 years ago. The taboos that the russ challenge are always changing," Hjemdahl said.