Norwegian couples have long had a penchant for living together without being married. Now, for the first time, the majority of babies born in Norway are also being born out of wedlock. 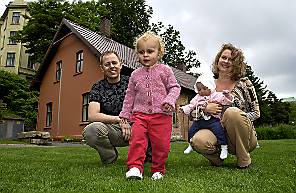 Paal Nupen and Ragnhild Hvidsten don't see any pressing need to get married. They've lived together for four years and have two children, Tora, 2 and Fanny, five months.

"I've never been preoccupied with the symbolic ritual," Paal Nupen of Bergen told newspaper Aftenposten. He and Ragnhild Hvidsten are typical examples of the thousands of Norwegians who share a household and are raising a family without bothering to get married.

A new study shows that just over half of all the babies born in Norway last year had unmarried parents. Even though Scandinavians in general have a long tradition of living together, the numbers show a marked societal change in the past 30 years.

In the 1970s, only 10 percent of all Norwegian babies were born out of wedlock. Last year, the figure had grown to 50.7 percent of the roughly 55,000 babies born in the country.

The number of women opting to have children on their own also has grown significantly. In 2002, 9 percent of the babies born in Norway had single mothers, double the number 30 years ago.

"The amount of children born out of wedlock has never been bigger, since birth statistics started being kept several centuries ago," said Lars Oestby, a researcher with the state Central Bureau of Statistics.

North versus south
In some areas of Norway, the percentage is even higher. In Nord-Troendelag, for example, 58 percent of all babies were born to unmarried parents. In the county of Nordland, the figure was 55 percent.

More traditional lifestyles were found in southern Norway. In Vest-Agder, which is also known for its religious sects, 25 percent of babies born in the country had unmarried parents.

Frode Thuen, a lifestyles researcher at the Hemil Center in Bergen, said marriage no longer marks the beginning of a life together for two people. "Now it's used more as a confirmation that two people want to live together, after testing out their relationship over time," he said.

Thuen also noted that couples who have children without being married remain three times as likely to break up than married couples are.

Aasa Rytter Evensen, a local expert on lifestyles, said it was "unfortunate" that so many Norwegians have children without being married. "It's worrisome that people who choose to have children together don't dare to commit themselves more in relation to each other," she said. "The children risk growing up with less stability."